The Methamphetamine Action Plan (MAP) outlines a comprehensive plan of actions that are aimed at reducing methamphetamine related demand, supply and harm, in recognition of the complexities associated with drug use.

The Methamphetamine Action Plan (MAP) outlines a comprehensive plan of actions that are aimed at reducing methamphetamine related demand, supply and harm, in recognition of the complexities associated with drug use.

There is considerable community concern about the effects and impact of methamphetamine use in Western Australia (WA). According to the Australian National Drug Strategy Household Survey, in 2016 methamphetamine became the drug of most serious concern to the general community, overtaking alcohol and more than doubling the level of concern in 2013 (16.1% to 40%).

In an effort to address the methamphetamine problem in the State, the WA government committed to implementing the Methamphetamine Action Plan (MAP). The MAP is focused on reducing methamphetamine demand, supply and harm, through coordinated implementation of initiatives across Government. This includes the establishment of the MAP Taskforce (see information below).

Since 2017 the WA government has allocated $244.8 million for the implementation of MAP initiatives, including:

Notably, between August 2016 and August 2019 the rate of methamphetamine consumption in Western Australia decreased by 4.2%, as measured by the National Wastewater Drug Monitoring Program. 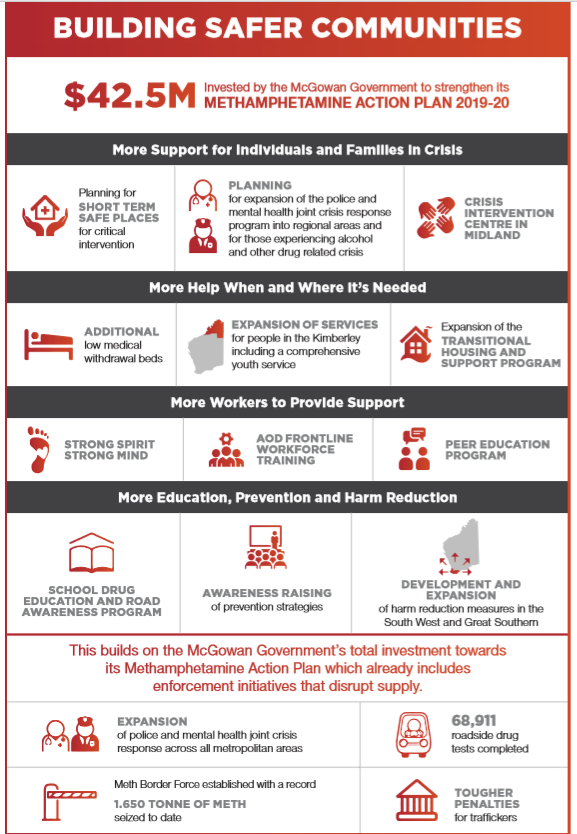 Show more
The Government established a Taskforce to advise on what more could be done to target support to areas of greatest need.

The MAP Taskforce was established on 26 June 2017 to provide advice to Government on:

In providing its advice to Government, the MAP Taskforce was asked to consider the needs of the Western Australian community generally, as well as the specific needs of vulnerable groups.

Read about what the MAP Taskforce heard.

The MAP Taskforce Final Report represents the independent advice and recommendations to the State Government. 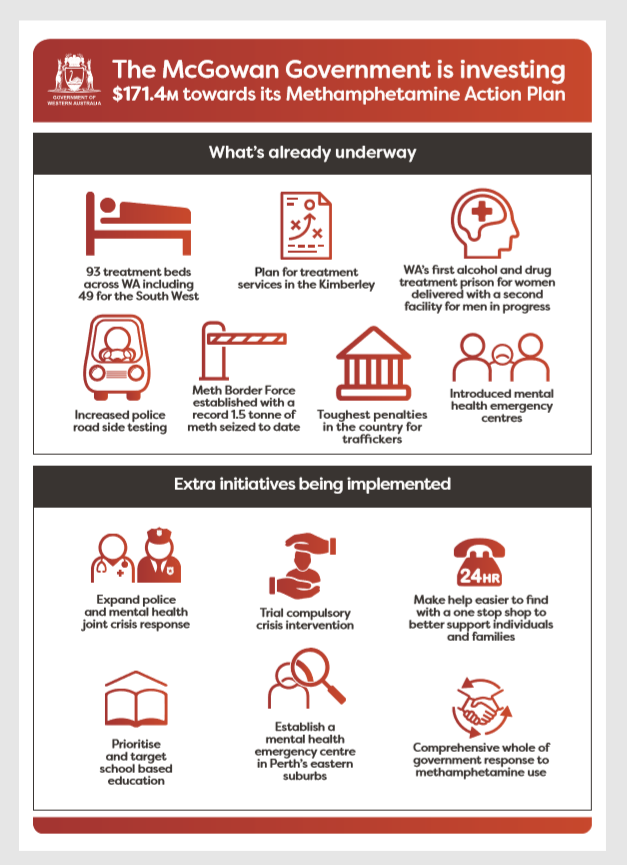 The WA Government is delivering its co-ordinated and integrated Meth Action Plan bringing the total investment to $244.8 million to address methamphetamine issues in WA.

It has released the whole-of-government response to the Meth Action Plan Taskforce report − outlining a range of targeted, functional and practical initiatives that focus on prevention, early intervention, treatment and support, and law enforcement.

The $42.5 million package, part of the 2019-20 State Budget that will form the implementation plan in response to the report, includes:

Read the full final report, along with the recommendations, in the document below.

Show more
If you're looking for someone to talk to, please call one of these helplines. They are there to listen, provide advice, information and referrals.

In an emergency call 000 or visit your local emergency department.

If English not your first language, you can get free translation support through Translating and Interpreting Service (TIS National) by phoning 131 450.

If you have speech or hearing difficulties you can contact us by phone through the National Relay Service.