Comparative analysis of cost of living

News story
Deloitte Access Economics has prepared a report showing the average weekly household spend is lower in Perth than the larger interstate capitals and also lower in Bunbury when compared to similar regional towns in New South Wales, Victoria and Queensland. 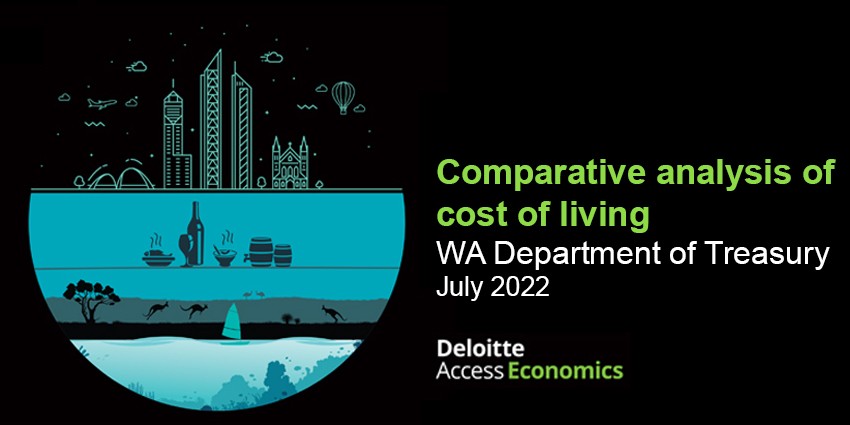 Deloitte Access Economics was engaged by the Western Australian Treasury to undertake a comparative analysis of cost of living between Perth, Sydney, Melbourne, and Brisbane; and between the major regional centres of Bunbury, Newcastle, Geelong, and Sunshine Coast.  The purpose of the report is to measure current living costs likely to be faced by new migrants to WA relative to other States to inform the Government’s strategy to attract and retain skilled workers in the State.

The report shows that Perth has the lowest average household spend on goods and services, including housing costs, of the larger State capitals – with Perth’s average spend 10% lower than Melbourne, 19% lower than Brisbane and 24% lower than Sydney.

The report also shows that the direct cost of housing (including rent, mortgage repayments, local government rates, water rates, home insurance and other housing costs) were lower in Perth than the other capitals.  Housing costs were the largest contributors to the gap in total living expenses between Perth and the other capitals.  Mortgages and rents in Perth as a share of median income were lower than in other major capitals, except median house rents in Melbourne.

The analysis also showed that Perth is the most affordable city for most other components of the typical household spend.

Across the four regional cities, the report shows that Bunbury was the most affordable in terms of median prices and rents, with the cost of electricity (including credits) and a package of motor vehicle charges being lower for the typical household.