Public notice
The 2022 FPC Aboriginal Art Competition invited aspiring Aboriginal and Torres Strait Islander artists to submit an art piece in response to the brief, "What does forestry mean to you?" Seven entries were received from artists across WA and from different language and cultural groups, including:

‍Ngadju people - Ngadju country extends in the South-East of WA covering an area more than 120,000 square miles (larger than the United Kingdom) it surrounds the town of Norseman and expands the pristine Great Western Woodlands between Kalgoorlie and Esperance which is the largest intact temperate woodland left on Earth, home to 30 per cent of Australia's eucalyptus. It is also one of two sites in WA that has been dedicated to the National Reserve System under the Federal Government's new IPA program.

Based on the calibre of submissions, the FPC decided to purchase all the entries for an FPC art collection. A FPC Staff Choice Winner has been selected based on the staff competition judging that took place. All seven artists have entered into a purchase and copyright contract with the FPC, so all artworks are now available for our ongoing enjoyment and cultural learning.

Take the time to look at and read about these artworks, all conveying the deep connection that Aboriginal people have with the land and forests. 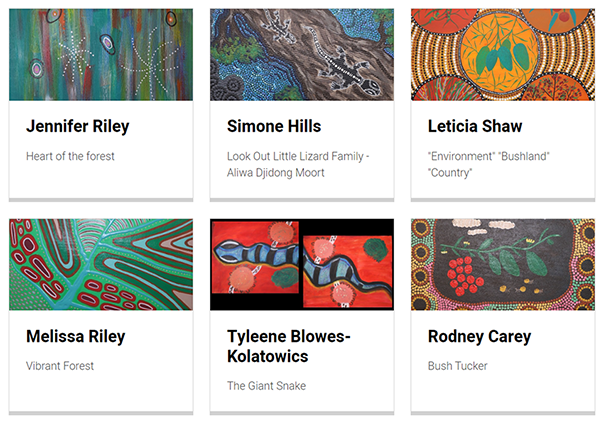 Show more
Diahane Riley is a Noongar Aboriginal Woman, her artwork is titled "Learning Together" 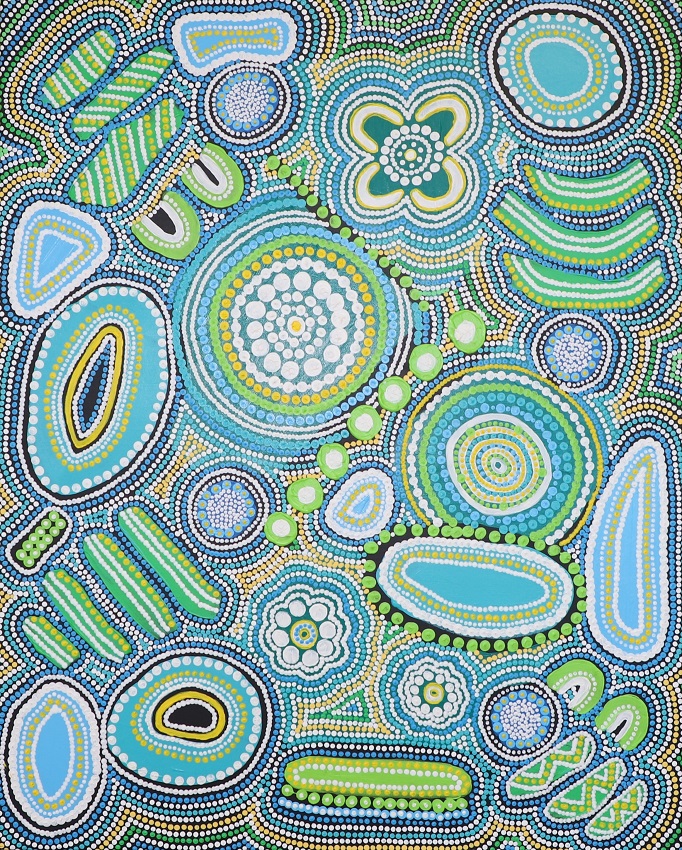 Being in the bush/forest, inland or along the coast, together with family, friends and loved ones is a beautiful and memorable time. In the bush perfect opportunities arise for elders to pass on important knowledge to younger family members.   These times are extremely important to learn how to care and respect nature. Not only are we with loved ones but we are among nature, among the things we love and care about deeply – the plants and animal life play an important part of our culture. Living in harmony with nature meant survival – our life. We will always have a deep connection to the land.

Show more
Jennifer Riley is a Noongar Aboriginal Woman, her artwork is titled "Heart of the Forest". 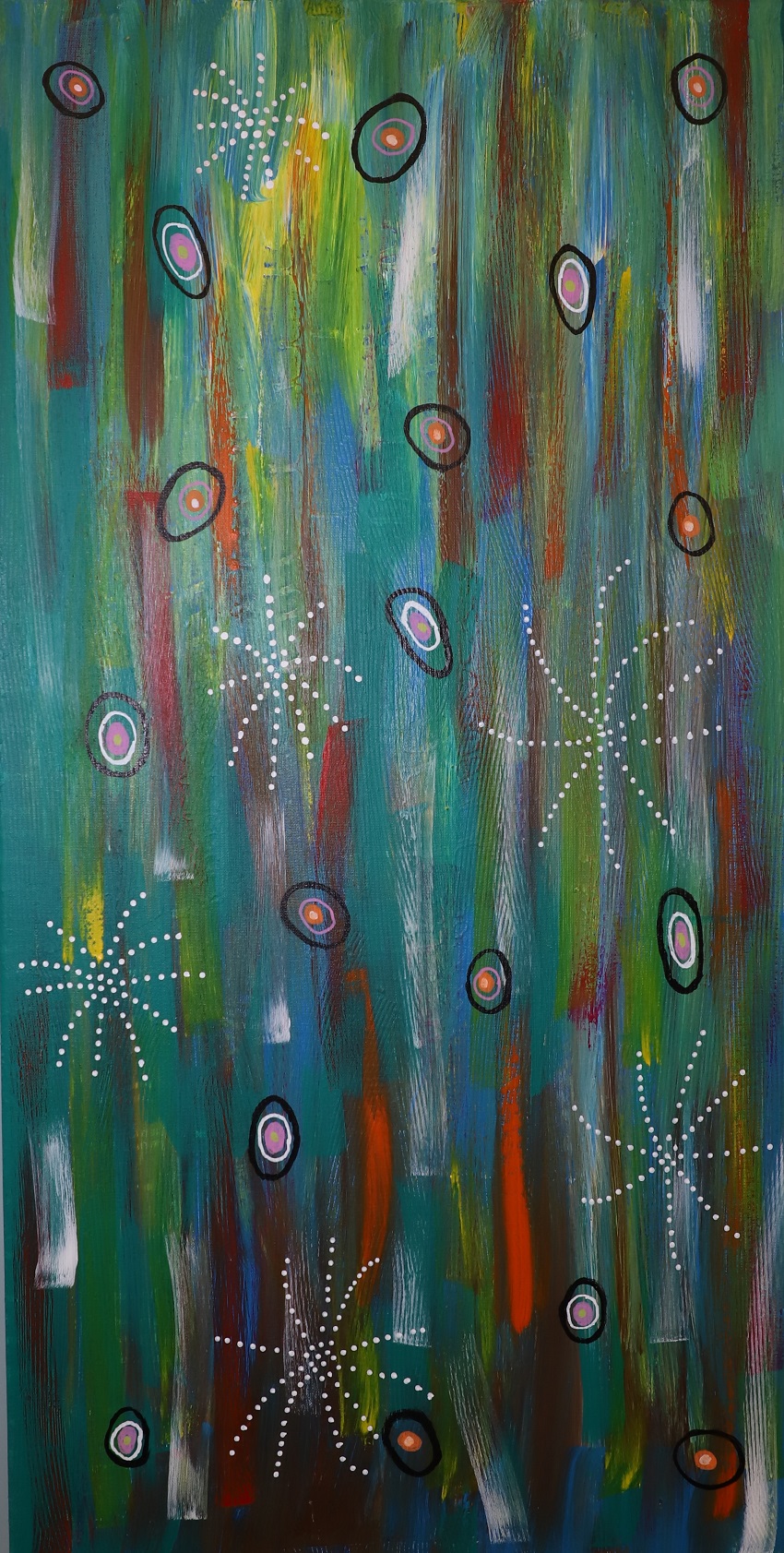 Heart of the forest

Beauty of the forest colours are so breathtaking. You see art through the spiders how they thread their web from tree to tree, what beauty the forest produces. To me forestry means always respecting and caring for our beautiful bushlands and animals that provide us with food, bush medicine, shelter and connection to our families. Always returning back things we borrow from the bush when we are finished, learning from our Aboriginal Elders and helping the next generations continue to learn traditions and how to look after our land. This is a piece inspired by a family 'moort' of 3 little lizards 'djidong' trying to run away from the water to safety as the tree they call home falls into the bilya 'river'. 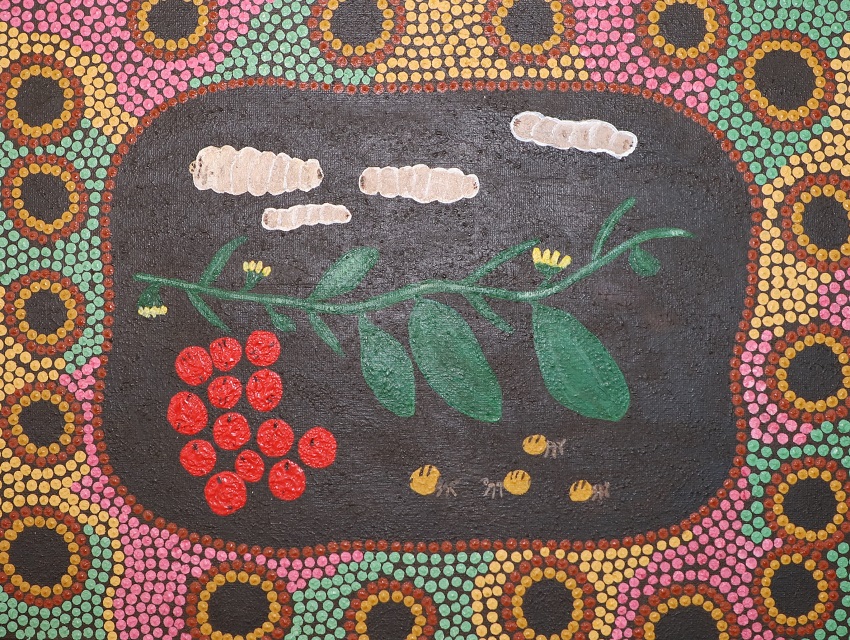 The artist explains the work captures some of their favourite forestry products found in the Goldfields region, bardee grubs, quandong fruit, honey ants and Karlkurla (silky pear), which is also the Wongi word for Kalgoorlie. 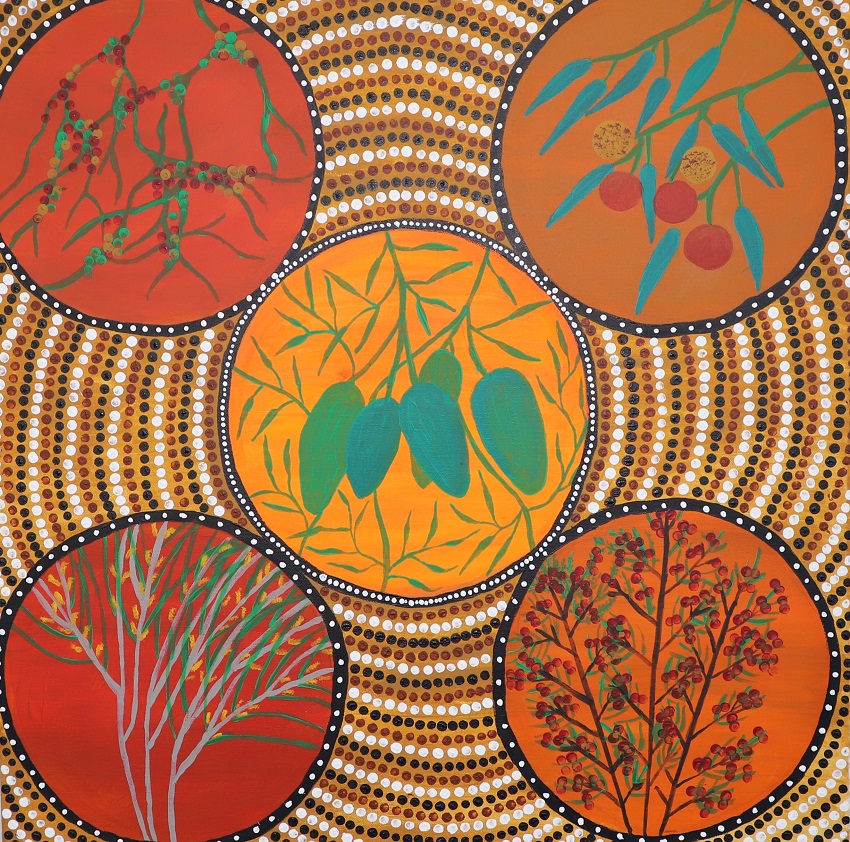 My Representation of my artwork is Kalgoorlie, Kulkula is the original name for Kalgoorlie which is the green bush pears and the other plants you see in my artwork are from the Goldfields like the Bardi tree, budga budga etc... that is my story of my painting. 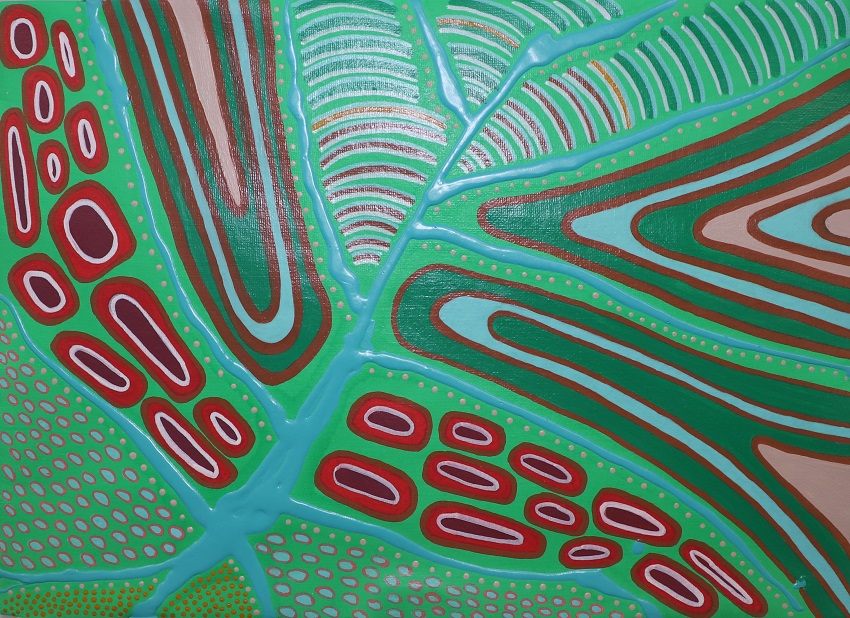 My art interpretation of the beautiful forest is strong, vibrant, and beneficial to each other on a spiritual and mental level. There were times when we would camp out at around the weir, I could see the areas of the forest being harvested and maintained, and each year we would visit, the regrowth would amaze me at how lush and green the forest would be. Springtime seeing the wildflowers and berries grow through the forest is beautiful. As I started this painting, I didn’t use a paintbrush, I free handed it, as I wanted the start of the painting to have a natural beginning, just like the forest, a natural beginning, then I used my resources (brushes and paint pens) to complete, just like today, how hard workers use their resources to maintain, care and respect the forest to keep it alive for generations to come.

The Indigenous believe at the bottom of the riverbed lived a giant snake.

If the children got too close to the river, the snake would eat them.

The elders would tell the young children to stay away from the river to keep them safe.

One day, the snake got so hungry it slid out of the riverbed to look around for children to eat.

The elders noticed the snake and threw spears and rocks at it to scare it away.

It collected the many beautiful and different colours of the forests, rivers, valleys, and mountains as they were created, to assist it blend in and stay safe from the Elders.