News story
Our river level monitoring network and flood engineers have been providing critical data and advice as part of the emergency response to the Kimberley floods. 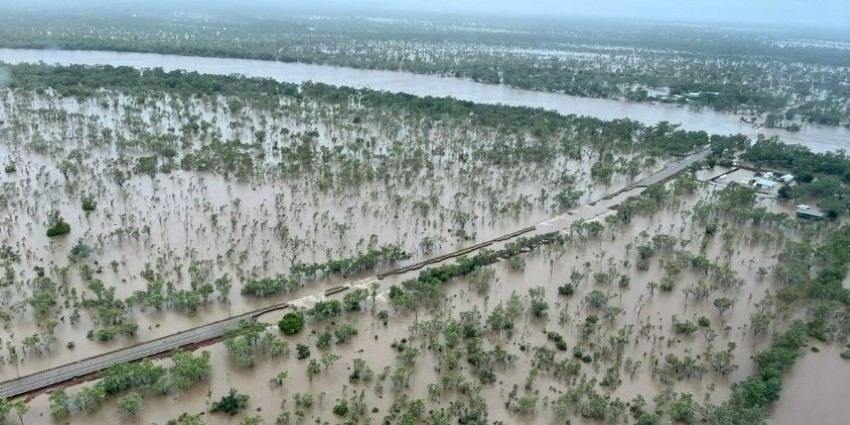 The Bureau of Meteorology and Department of Fire and Emergency Services utilise our monitoring network's real-time data and expert flood risk advice to assist with their response actions.

The record-breaking peak of the Fitzroy catchment flood on Wednesday 4 January was measured at 15.81 metres by our network near the Fitzroy Crossing bridge.

Monitoring of Fitzroy River flow at this site has been undertaken since 1956, and the 4 January flow exceeded the previous highest record level by more than 3 m.

The Great Northern Highway bridge at Fitzroy Crossing has been overtopped for the first time since its construction in 1974 and has incurred structural damage.

Preliminary estimates are that the volume of water going through the Fitzroy River floodplain is over 2,000 gigalitres per day – a volume equivalent of 2,000 Optus Stadiums full of water.

The Fitzroy River is in the West Kimberley region of Western Australia. It has 20 main tributaries including the Margaret River, Christmas Creek and Hann River, with a catchment of about 94,000 km2 – equivalent to a country the size of Portugal or South Korea.

Fitzroy Crossing and Derby are the catchment’s two major towns, with more than 50 Aboriginal communities also located in the catchment.

In the past week the Hann River has peaked almost 3 m higher than its previous record.

At least three of our gauging sites have been damaged by the floods, including the site at Fitzroy Crossing, which stopped working a day after recording the peak.

Our staff have also been in the field conducting some floodway gauging near Fitzroy following the flood peak.

Apart from supporting emergency response planning, the data collected during the floods will support our understanding of flooding in the Fitzroy catchment and improve the quality of data and advice to support the recovery.

Support is also being provided to the Department of Health, the Water Corporation and other parties in managing public health risks, including those associated with wastewater treatment overflows in the flood-affected areas.