The Perth Children’s Court is the first courthouse in Western Australia to host a Facility Dog thanks to a partnership between the Office of the Commissioner for Victims of Crime and Guide Dogs WA.

Five-year-old black Labrador, Winston, is specially trained by Guide Dogs WA to support victims of crime, witnesses to crime and other court users in the Children’s Court of Western Australia in Perth. 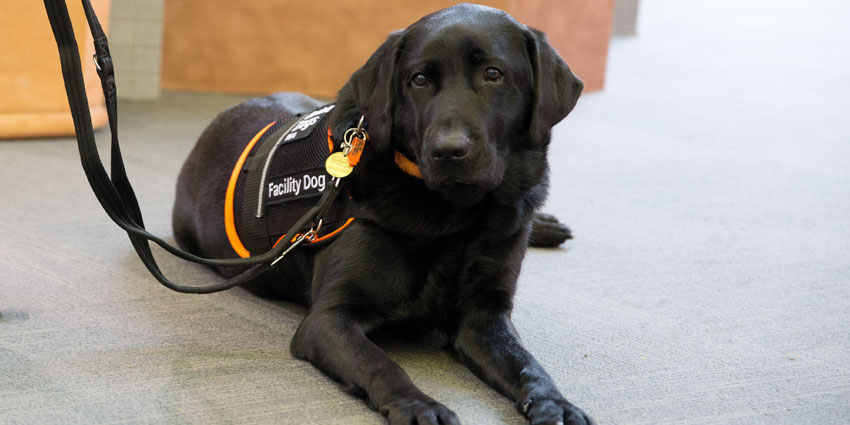 Winston and his handler, who is also from Guide Dogs WA, work with witnesses, victims of crime and other vulnerable people in the public and private witness waiting areas of the court. At other times Winston and his handler move around the public waiting areas of the court, where any court user can interact with him if they want to. Similarly, if people do not want Winston to approach them, they just need to calmly let his handler know.

Facility Dogs have been used in the criminal justice system for many years in North America, and more recently in other Australian States. There is significant evidence to show that interacting with a Facility Dog can reduce stress, increase mental clarity and improve speech and memory function.

Guide Dogs WA is an internationally accredited Facility, Assistance and Guide Dog organisation. Many people will know them for their work with the vision impaired. Winston has had several years of training with Guide Dogs WA and spent some time working as a Guide Dog before starting his new career in court. He will receive ongoing training during his time in the 12-month pilot program, and his welfare will be carefully monitored by Guide Dogs WA.

When does Winston come to court?

Winston is well-trained, and his handler will not approach anyone without their consent. People who dislike, are afraid of, or have any other objections to dogs should inform a security officer, registry staff member or the handler. There is a section of the waiting area set aside for this purpose that is not attended by the Facility Dog.

Who do I contact for more information or to give feedback?

As part of the pilot program evaluation, court users may be asked if they would like to complete a brief, anonymous survey about their interaction with Winston. This is voluntary. Any other feedback, questions or concerns about the program can be emailed to cvoc@justice.wa.gov.au

Department of Justice > Commissioner for Victims of Crime