All aboard the Purple Road

News story
How a Communities’ funded initiative is putting the spotlight on elder abuse and empowering older Western Australians. 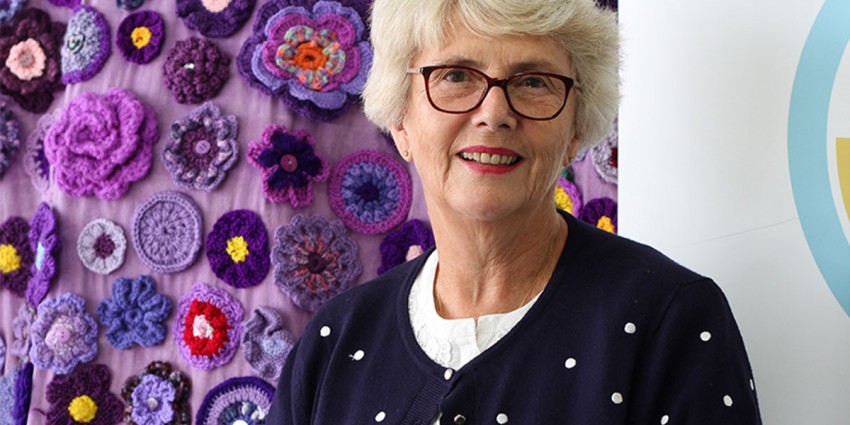 Judy Joukador has heard all kinds of first-hand accounts of elder abuse over the years. Although “abuse” is often associated with physical abuse, the most common themes the Perth-based volunteer hears involve financial, psychological and emotional abuse – often unwittingly inflicted by family or friends.

Every year, hundreds of elder abuse stories are symbolically captured through an elder abuse project called the Purple Road. Judy and other formally trained volunteer peer educators advocate for the protection of older people’s rights through the Northern Suburbs Community Legal Centre (NSCLC). Through the Purple Road initiative, they explain to seniors what elder abuse is, hear first-hand accounts of elder abuse and provide support.

The Purple Road grew out of the NSCLC’s Older People Rights Service (OPRS) and Elder Abuse Peer Education Scheme, which are both funded by the Department of Communities. The concept began in 2011 with an idea, a roll of material, some balls of wool and lots of enthusiasm. A decade later, it has become a collaborative artwork measuring over 30 metres and wide-spread community engagement. Various seniors’ community groups in Perth have worked with OPRS over the years to create new sections of the Purple Road.

On 15 June each year, which is World Elder Abuse Awareness Day (WEAAD), all sections of the Purple Road join together (purple is the symbolic colour of WEAAD). The textile artwork now contains thousands of hand-crafted flowers. Each flower is unique and represents a unique story.

Little did Judy know that when the small prototype was taken to a community group for the first time, that it would develop into a long 30 metre-plus symbolic statement.

“We put the prototype on display at a City of Stirling library together with some elder abuse information and a phone number,” she recalls. “Over time, people began to make contact with us and open up to us about their personal experiences of elder abuse.”

Judy and other OPRS volunteers regularly visit seniors’ community groups in Perth and deliver tailored presentations about elder abuse education and awareness. As they break down the barriers with the people they connect with, some seniors begin to share their stories. Each new story, symbolised by a unique flower, is then stitched onto the Purple Road. Collectively, the many thousands of flowers on the road represent the vast collection of experiences of elder abuse in our community and the underlying issue of casual ageism.

“Elder abuse can be a very difficult topic to draw people into because generally people don’t want to talk about it,” Judy explains.

“Elder abuse has a stigma. It’s often called Australia’s secret shame. So having this textile piece on display means that people come and have a look at it, find out what it is, and they get drawn in. It’s a conversation starter.”

Understanding elder abuse is the first step. When Judy explains to community groups that elder abuse is not just physical abuse, older people are usually surprised. When they begin to confide in her about their experiences, the stories often involve financial abuse, emotional abuse and feelings of fear and helplessness. Common examples include financial abuse over money borrowed or lent and emotional abuse such as threats to coerce agreements, bullying and forced isolation. Being forced to do something they don’t want to do is a recurrent theme.

“For example, a lady whose husband had passed away found a mini skip outside her house one day,” Judy recalls.

“She asked her family why the skip was there and they told her: ‘mum we’re going to move you into a nursing home and you need to clean out your house and get ready for that.’ This had been decided without any consultation with their mother.”

In Judy’s experience, families trying to moderate the older person’s behaviour by threatening them or isolating them is another common occurrence.

“Mostly there’s fear of reprisal,” Judy explains. “If they say something or complain about something, it might get taken away. Or they won’t be able to see the grandchildren or won’t be taken to the doctors or won’t get taken shopping.

“I’ve come across a few cases where the person is isolated because they’re unable to get out and about and they’re not allowed to have access to a phone or have very limited access to a phone. And there are controls placed on phone costs and a vetting of who they’ve called and why have they called.

“Elder abuse is never acceptable under any circumstances,” she adds.

The Purple Road project’s peer-to-peer approach has enabled seniors to feel comfortable in the presence of other seniors and open up and talk. They feel they have a vehicle to share their elder abuse experiences but also to share their positive life experiences. They are heard and listened to. They are supported and empowered.

“We listen to their stories, provide support and make a real difference,” says Judy. “Personally, I think I also come away from it with a sense of gratitude for my family and for the good care they give me.”

COVID-19 has exacerbated this issue, as it’s widely acknowledged that the risk of elder abuse has increased globally during the pandemic due to increased isolation. Judy recounts a disconcerting story recently shared with her that highlights the gravity of what can unfold during periods of forced isolation.

She describes how a woman living in Perth was unable to travel interstate to visit her elderly mother because of COVID-19 travel restrictions. Sadly, during this time her mother passed away. The woman and her family then discovered that before their mother died, an acquaintance of her mother had begun telling her that her family didn’t care about her anymore. This discovery came to light at the reading of the will. Just before she died, she had changed her will in favour of the acquaintance and nothing was left to her family.

Judy has heard many elder abuse stories that have almost moved her to tears, but one experience particularly touched her. One day she went to one of the libraries where a she had previously left a section of the Purple Road. She found a note left there by a woman, which said that her mother had passed away due to abuse.

“What came through was the desolation of the daughter that nothing had been done. She said in the note that she’d lost the most wonderful friend. And that really touched me. I thought there are a lot of people out there who are grief stricken and the Purple Road has allowed them to express that.

“This lady was obviously grieving because of what happened. So I made a little triple-layer flower and put a note in the library that said this flower is your mother’s story and I wanted you to know that we’ve listened and heard your story and we’re not going to let your mother’s death mean nothing.”

Judy and the other OPRS volunteers know the Purple Road project is making a difference and has resulted in many positives. For each distressing story that involves an older person experiencing elder abuse, there is support, understanding, advice and care. Judy says having someone to just give them a hug, listen to them and value them makes the world of difference.

If it’s a current issue the person is dealing with, often the matter is dealt with and resolved. She cites the example of a woman whose family member was forcing her into to child-minding via emotional blackmail. The women received support and advice and the matter came to an amicable resolution.

Elder abuse is a complex issue and in certain circumstances may not be legally considered a criminal act. Which is why support services are so critical. Communities works in partnership with key service providers to fund a number elder abuse support services in Western Australia.

More than $6 million of funding been delivered or committed by Communities on elder abuse awareness initiatives since the launch of the 10-year WA Elder Abuse Strategy in November 2019. These commitments span elder abuse prevention, early intervention, awareness, education, training and research.

Three key support services that Communities funds are the 1300 724 679 WA Elder Abuse Helpline and Information Service delivered by Advocare; the Older Persons Rights Service delivered by the Northern Suburbs Community Legal Centre, comprising legal advice, information and support to older adults who are at risk of/currently experiencing elder abuse in the Perth metropolitan and City of Mandurah areas; and the Vulnerable Seniors Peak Body established by Council on the Ageing (COTA) WA.

Communities and its support partners are not only aligned in their commitment to advocating for the protection of seniors’ rights, but also to advocate and promote positive ageing strategies. The negative stereotypical perception that older people are frail and cannot contribute to the community is beginning to change. Empowerment is the new mantra: empowering older people to know their rights, age actively, be connected and engaged to community, make their own decisions and live the life they want.