Media release
Two Department of Justice staff members have been recognised in the 2022 Queen’s Birthday Honours List for their outstanding service to the community. 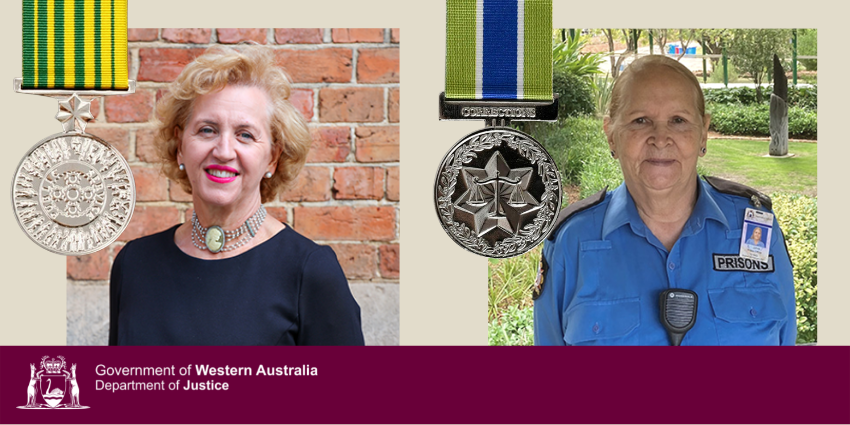 Director General, Dr Adam Tomison, said both were a credit to the Department and very deserving winners.

“Ms Stampalia’s role is enormously important for the State’s Justice system, a role she carries out with great leadership, commitment and professionalism,” Dr Tomison said.

“She has championed a strong reform agenda in the implementation of more holistic approaches to the justice system through amendments to Government Legislation and the introduction of therapeutic court process to reduce the impact of drug and alcohol abuse, and family violence.

“This award, ‘For outstanding public service in operational reform and modernisation of the Courts and Tribunals of Western Australia’, is richly deserved.”

Ms Johns was the sole WA recipient of the Australian Corrections Medal (ACM) in this year’s Queen’s Birthday Honours List. The ACM is a civil decoration awarded to operational members for distinguished service.

She has worked in corrections for almost 25 years, joining as a group worker at the Rangeview Juvenile Remand Centre in July 1997 and then qualifying as a prison officer in 2001.

Most of Carrol’s career has been spent at the Wooroloo Prison Farm where she is held in high regard by both prisoners and her fellow Officers.

“Ms Johns has been a trailblazer for Aboriginal women in the Department and a tremendous asset as an innovator and cultural ambassador, making a significant contribution to bridging the cultural divide between Prison Officers and Aboriginal prisoners.

“She was the key facilitator for the first Aboriginal Cognitive Behavioural Therapy Program at Wooroloo and initiated the use of an early alert system to identify young offenders who transitioned from youth detention to adult custody.

“Ms Johns maintains a high professional standard and balances the cultural differences without conflict. I thank her for the great work she has done, and continues to do, at Wooroloo.”