Media release
Young victims of crime and witnesses will soon have access to some canine comfort when WA’s first Justice Facility Dog commences official duties at the Perth Children’s Court. 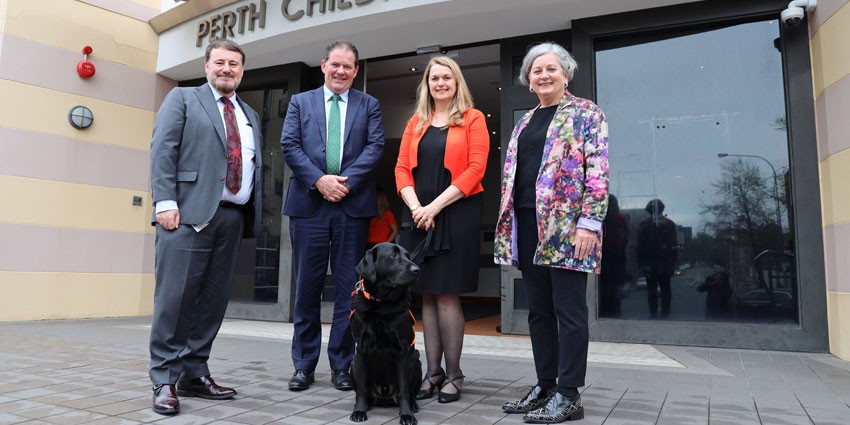 Winston, the five-year-old black Labrador, has been trained by Guide Dogs WA to interact gently and calmly with victims, witnesses and other court users to reduce the stress and anxiety commonly experienced in the courthouse environment.

He and his handler will attend the Children's Court two to three days a week from tomorrow, Tuesday 21 September, as part of a 12-month pilot program to assess the viability of extending the service, including to other WA courts.

Department of Justice Director General, Dr Adam Tomison, said facility dogs used in a range of legal settings internationally and other Australian jurisdictions have been highly successful in reducing anxiety in people interacting with the justice system.

"The Department of Justice is committed to improving outcomes for victims of crime, witnesses and other vulnerable people engaged with the justice system. Achieving this requires a range of targeted interventions across the justice system."

The pilot program will cost $97,000 and is being managed by the Office of the Commissioner for Victims of Crime.

Commissioner for Victims of Crime, Kati Kraszlan said research showed that the experience of going to court can be a risk to the psychological safety of victims of crime, witnesses, and children.

"We hear of victims describing the experience of giving evidence in court as distressing and sometimes akin to the offence itself in terms of traumatisation," Ms Kraszlan said.

"The physiological effects of stress and anxiety can significantly impact a person's memory, and ability to concentrate and communicate.

"We have launched this pilot program based on strong evidence that interacting with a trained facility dog has positive effects on a person's wellbeing. In the presence of a calm, relaxed dog, people experience physiological changes which combat the effects of courtroom induced stress."

The President of the Children's Court of WA, His Honour Judge Hylton Quail, is very supportive of the Justice Facility Dog Pilot Program being held at the Perth Children's Court.

"Young people involved in the criminal justice system are particularly vulnerable as many of them have experienced disadvantage and trauma," Judge Quail said.

Guide Dogs WA selected Winston for this role based on his skills, abilities and personality. Winston has a reputation as a 'happy' dog, characterised by the fact his tail is almost constantly wagging.

His handler has tertiary qualifications in social work and animal ethics. She also has a professional background in child protection and experience working in the Children's Court.

"We're pleased to partner with the Department of Justice on this ground-breaking initiative in WA, which will have meaningful outcomes for young people and families involved in the criminal justice system," she said

"Winston has undergone a comprehensive and tailored training program developed and implemented by our highly specialised professional trainers. He is ideally suited to a career as a Justice Facility Dog and we look forward to seeing him have an impact in this role."

Winston and his handler will operate in the public waiting areas of the courthouse or private witness waiting areas. They will not enter the court room or remote witness facility while court is in session.

People can touch, pat and interact with Winston if they choose to. If a person is upset or anxious the dog can provide comforting body pressure by placing its head on their lap or lying on their feet.

The handler and dog will never approach anyone directly without their consent. Public signage will inform court users of the dog's presence each day and advise them to inform staff if they are afraid of the dog or do not wish to be near it.