News story
The subtle way Communities is raising awareness of a sensitive issue. 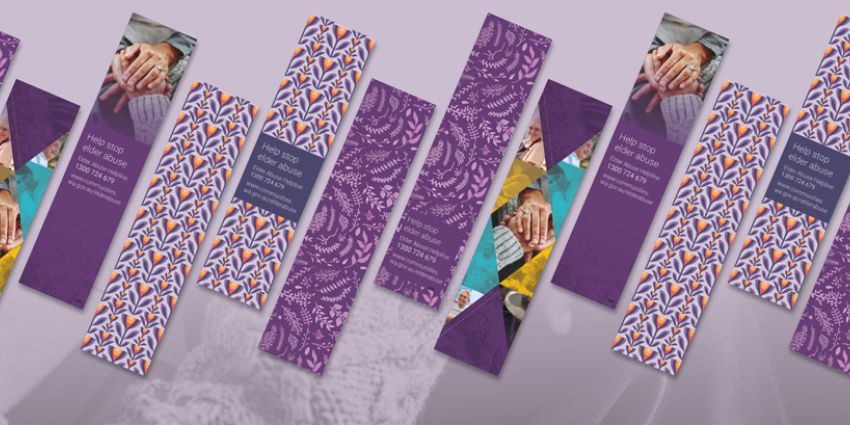 A simple, printed bookmark might not seem like much to raise awareness of elder abuse in our community but that is the whole point.

The range of subtle purple bookmarks grew from the story of an older person that Communities' elder abuse team encountered at World Elder Abuse Awareness Day (WEAAD) in 2021.

The lady asked the team for the elder abuse helpline number details for ‘her friend’ who was experiencing abuse. Offered a small, printed postcard, she was reluctant to take it claiming it was too big and obvious for ‘her friend’ to hide. The team used scissors to cut out just the number, but it got them thinking.

Elder abuse is a complex issue and for many older people, understanding that what they are experiencing is abuse is the first step to confronting the issue. Many older people are surprised to learn that elder abuse is not just physical abuse but also financial and emotional abuse (often resulting in feelings of fear and helplessness).

For the lady who approached the team, feelings of fear were mixed with the need to seek out elder abuse support services for ‘her friend’. As a result, the discreet and easily hidden bookmarks were born.

Bookmarks are available at all public libraries to help inform people and advocate supports for older Western Australians.

Find out more about what Communities is doing to raise awareness of elder abuse by visiting Communities Elder Abuse Strategy page.