Media release
The operators of an accommodation facility in Newman have been ordered to pay more than $17,000 for unlawfully burying oil and other pollutants about 50 metres from the Fortescue River, and within the Newman Public Drinking Water Reserve. 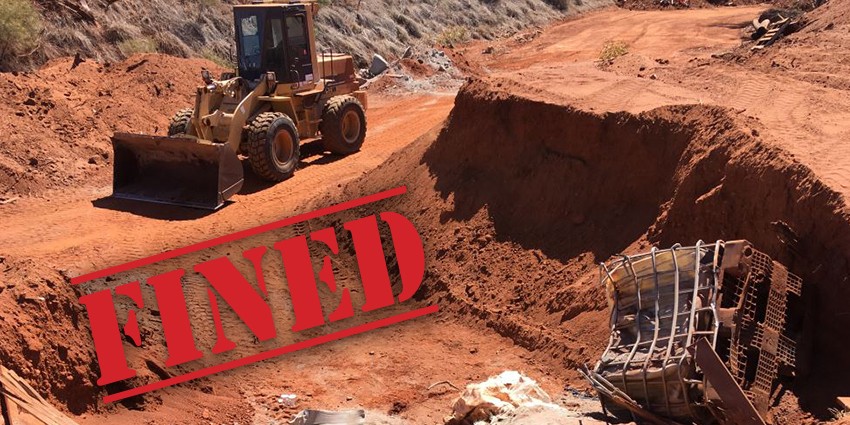 Between 25 and 29 August 2019, a contractor was engaged to construct an amphitheatre at the rear of the premises of Oasis @ Newman, a motel seven kilometres south of the town near the Fortescue River.

The contractor used a forklift and loader to transport eight IBCs, together with other waste items, and buried them about 50 metres from the Fortescue River. Prior to burying the IBCs, the contractor removed the lids and punctured the IBCs to allow the contents to spill into the soil.

On 12 September 2019, Inspectors from the Department of Water and Environmental Regulation (the department) attended the site to oversee its excavation, which was conducted by the contractor. During the excavation, several IBCs and two 20 litre plastic containers were uncovered. They were leaking oil-like substances.

ChemCentre analysis concluded that the substances were vegetable oil, diesel, and other hydrocarbons.

On 8 September 2022 in the South Hedland Magistrates Court, Oasis was fined $10,000 for the first offence (that involving the discharge of diesel and hydrocarbons), $2,000 for the second offence (that involving the discharge of vegetable oil), ordered to pay prosecution costs of $1,613.30, and ordered to reimburse the department for clean-up costs of the amount of $4,155.

Executive Director of Compliance and Enforcement at the department, Kelly Falkner, said the actions of Oasis and the contractor could have caused major environmental damage.

“If the buried hydrocarbons and oils had reached groundwater and surface water, there would have been risk of the contaminated water reaching drinking reserves,” she said.

“Although the company co-operated with the investigation and have since taken steps to ensure it does not happen again, the initial actions of the company showed a blatant disregard for the environment.”