A Waterwise Perth is cool, liveable, green and sustainable – a place where people want to live, work and spend their time. 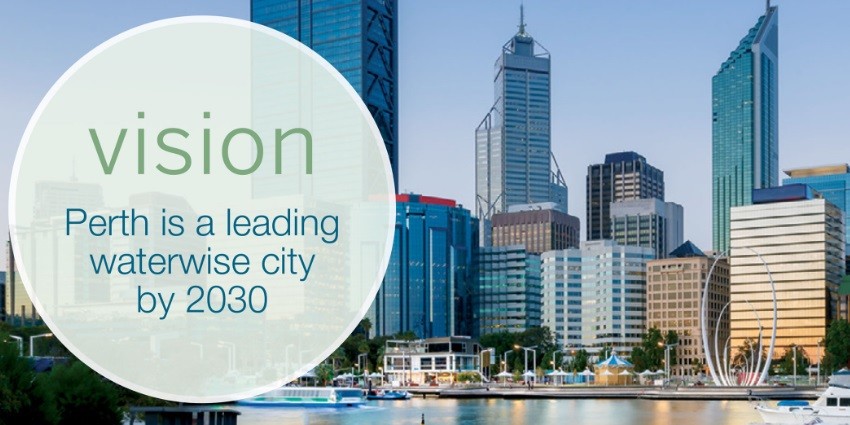 The Waterwise Perth Action Plan 2019 was the first of successive plans to transition Boorloo (Perth)1 to a leading Waterwise city by 2030.

The south-west of WA is one of the world’s regions most affected by climate change. Western Australia used to get 420 billion litres of water running into our dams each year, but with climate change significantly reducing rainfall since the mid-1970s, we can now expect just 25 billion litres. To ensure our city can remain beautiful, green and liveable, we must act now to be more Waterwise.

The first action plan called on everyone in the community to play a role. State Government, councils, industry, individual businesses and households all worked together to help secure our water future by taking actions aimed at reducing per-person water use in Boorloo to 110 kL a person per year.

The first plan set the groundwork to respond to the impacts of climate change on Boorloo’s water supplies and meet the water needs for a growing population. It outlined the actions to be taken in the first two years of this journey and established a solid foundation for the successive plans needed to achieve our 2030 targets.

These actions were set out at different scales; from household to precinct, suburb and city scale, and also included actions for government to take as a driving leader for change.

Eight State Government agencies collaborated to deliver 38 actions within the first Waterwise Perth Action Plan, all contributing towards making Boorloo (Perth) a leading waterwise city. The scorecard below shows some of the impressive cumulative water efficiencies we have collectively achieved up to September 2022, and how the action in the Action Plan contributed to urban greening, increasing the tree canopy and mitigating heat, as well as to community engagement and education. 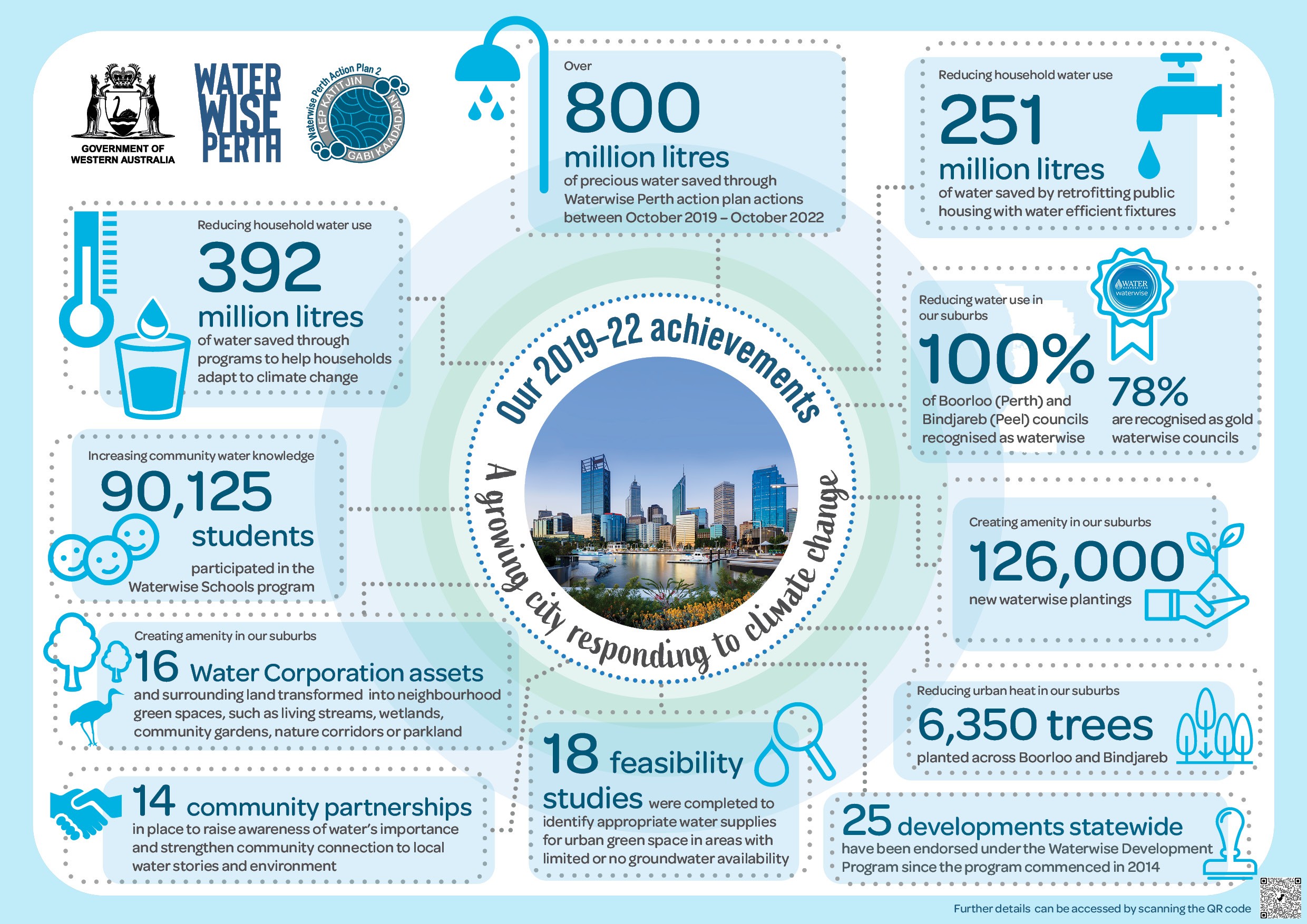 Launched on 17 October 2022, Kep Katitjin – Gabi Kaadadjan will deliver an ambitious scope of work across State Government with a greater focus on engagement with Whadjuk and Bindjareb Noongar people, climate resilience and adaptation, and water quality and ecological health.

Transitioning to a leading Waterwise city means changing the way we manage water in our urban landscape between now and 2030. This change can only be delivered by the joint efforts of State and local government, Traditional Owners, the community and urban development industry.

The first action plan was drawn from the ideas and actions of over 200 stakeholders from all sectors during extensive consultation in 2018. Commitments were made from across government, including from the departments of Water and Environmental Regulation; Communities; Finance; Local Government, Sport and Cultural Industries; Planning, Lands and Heritage; and DevelopmentWA; METRONET and the Water Corporation.

Ongoing consultation, design and testing of new actions was carried out in collaboration with the already established and involved Water Sensitive Transition Network. This is a group of leaders from across State and local government, industry, research and community organisations, working together to support Perth’s transition to a waterwise city. We also continued our relationships with Water Sensitive Cities Australia (which arose from the now completed Cooperative Research Centre for Water Sensitive Cities).

The success of this whole-of-government approach has led to three more agencies joining the collaborative effort to deliver the next significant step in the waterwise journey, through Kep Katitjin – Gabi Kaadadjan.

While recognising that many people from community, industry and local government organisations were already leading the way individually in waterwise practice, working collaboratively has allowed us to push boundaries and develop leading on-ground waterwise outcomes. The new plan features case study examples of where this has created exceptional spaces – see page 30 for a description of the Wharf Street Smart Park, and page 37 for the Gold Waterwise Development OneOneFive Hamilton Hill. Both projects sought to increase engagement and involve Noongar people, who are the original stewards of this landscape and its water.

As Indigenous knowledge and connections to Country are vital for sustainability and healing Australia, Kep Katitjin – Gabi Kaadadjan has an even stronger focus on integrating First Nations values and knowledge systems into our water planning, management and care for Country, through the inclusion of three specific Noongar engagement actions, as well as a commitment to looking for opportunities in every one of the 41 actions to walk together, understand, and integrate Noongar values and knowledge.

Monitoring success and adapting our action

As successive action plans will be needed to achieve the targets by 2030, an annual report card on progress was developed. Successful implementation of this action plan and subsequent plans are measured by:

[1] The term ‘Boorloo’ often refers to the city of Perth, but in the context of the Waterwise Plans includes the city and the broader region including the north-west, north-east, south-west, and south-east sub-regions of the Perth metropolitan region.

We will increase water savings in new homes

We will encourage new developments, including those in infill areas, to be more waterwise

We will increase Indigenous engagement and participation in water resource management

We will update Government policies to normalise best Waterwise practice

We will undertake detailed water planning in priority areas

We will improve information to assist Waterwise planning and implementation

We will improve water efficiency in Government owned buildings

We will show leadership and demonstrate innovation in Government led development