About the Department of Justice

The Department of Justice supports the community, Western Australian Government, judiciary and Parliament through the provision of access to high quality justice, legal and corrective services, information and products.

The Department has a diverse range of services, which have the potential to affect all Western Australians. These include:

Reducing the over-representation of Aboriginal people

The Department of Justice remains steadfast in its support for the Government’s priority to reduce the over-representation of Aboriginal people within, or at risk of, entering the justice system.

Currently, Western Australia has one of the highest rates of Aboriginal people in prison nationally with 3717 incarcerations per 100,000 population, around 60 per cent above the national average. The over-representation of Aboriginal people in custody has a significant impact on the cultural, emotional and social wellbeing of those individuals, their families and Western Australian communities.

As part of the McGowan Government’s Our Priorities, the Department of Justice has a lead role in addressing Aboriginal Wellbeing by reducing the over-representation of Aboriginal persons in custody. The Department of Justice is currently working with WA Police, the Department of Transport and with other public sector agencies to bring about positive change. First, by developing specific projects to address instances where Aboriginal persons are in custody due to driver’s licence offences or unpaid fines. This includes reforming the Fines, Penalties and Infringement Notices Enforcement Act 1994 (WA) so that imprisonment is a last resort and there is more flexibility in the imposition and fulfilment of work and development orders.

Second, the Department of Justice is part of the Justice Planning and Reform Committee, a cross-agency steering committee chaired by the Department of Premier and Cabinet. This committee has initiated and supported the development of a number of projects to better manage the forecast increase in the WA prison population. These strategies were funded by Government in the 2019/20 budget and are currently being implemented by Justice. They include reducing avoidable remand, increasing sentencing flexibility for the courts and access to rehabilitative services for offenders, and strengthening post-release supervision, particularly by expanding the use of electronic monitoring, where safe and appropriate to do so.

The Department of Justice is collaborating with other agencies and working in partnership with Aboriginal communities to improve the outcomes for young people, and particularly Aboriginal people, who are in danger of, or already have, come into contact with the criminal justice system.

The Department of Justice is supporting the Government’s Our Priority on building a Safer Community, to reduce the number of young offenders returning to detention by helping them to successfully turn their lives around. Youth Justice Services is collaborating with a range of agencies to work with young people at Banksia Hill Detention Centre and in the community to reduce reoffending through programs and services designed to encourage better life choices and to divert them from the criminal justice system.

Work was begun on the development of a Kimberley Juvenile Justice Strategy, which is based on a partnership between Government agencies, the non-government sector and Aboriginal community-controlled organisations in the Kimberley region. The Strategy will contain a range of short, medium and long-term programs designed to assist with the prevention of youth crime and re-offending. The intent is to provide genuine opportunities for community engagement and co-design opportunities in creating a better response to youth offending.

To help achieve the Government’s target, the Department of Justice has developed a Managing Drugs and Alcohol in Prisons Strategy. The Strategy has four key goals, including supply control, demand reduction, harm reduction, and monitoring and innovation. The Department is also examining its legislative powers with regard to searching and drug testing in prison facilities to ensure it has the appropriate legal powers to effectively to stop the illegal supply of alcohol and drugs into custodial facilities.

The Government has a strong rehabilitative focus to illicit drug use. As part of its Methamphetamine Action Plan announced in March 2017, Corrective Services opened a re-purposed Wandoo Rehabilitation Prison at Murdoch in August 2018. This prison is now successfully operating as the State’s first female alcohol and other drugs rehabilitation prison. Wandoo, together with the development of a men’s Alcohol and other Drug unit currently being constructed as part of the Casuarina Prison expansion and due to open in 2020, will assist in breaking the cycle of alcohol and drug-related crime by providing high quality rehabilitation to prisoners.

Growth in the adult prisoner population continues to place increased pressure on the prison estate. As the prison population grows, the challenge of dealing with the specialised needs of particular groups (cohorts) of prisoners also increases. Consistent with national trends, there is an increasing population of ageing prisoners and prisoners with mental health and drug and alcohol issues.

The Government is investing more than $300 million into prison infrastructure. The Department of Justice is undertaking construction of 1,228 new prison beds and recruiting 458 additional prison officers, which will significantly increase the capacity of the prison system and enable the Department of Justice to more safely and effectively manage a diverse and growing prison population.

Other areas of the Department of Justice are also experiencing demand pressures. For example, the Office of the Public Advocate continues to experience increasing demand for services to vulnerable adults with decision-making disabilities as a result of the ageing population and increasing numbers of people affected by an intellectual disability or mental illness who require a guardian. Similarly, the Public Trustee has also continued to experience increasing demand, with a particular increase in the number of people with little or no capacity to pay for services.

The Department of Justice continues to deliver legislation to support the State Government’s significant legal reform agenda. The Department has focused on the needs of victims of crime as well as increasing community safety for Western Australia through the introduction of key legislation.

Legislation currently in development for introduction in 2019/20 include the Fines Penalties & Infringement Notices Enforcement Amendment Bill 2019, Criminal Law (Mental Impairment) Bill 2019 and High Risk Offenders Bill 2019. The Strategic Reform division, Parliamentary Counsel and State Solicitor’s Office, Office of the Commissioner of Victims of Crime and Court and Tribunal Services have all been heavily involved in this work.

As a result the State Solicitor's Office has developed resources to manage civil claims made against the State of WA in relation to historic child sexual abuse matters. SSO anticipates a significant increase in claims following the proclamation of the Civil Liability Legislation Amendment (Child Sexual Abuse Actions) Act 2018.

The Department of Justice has also led Western Australia’s participation in the Royal Commission into Institutional Responses to Child Sexual Abuse which has had a profound impact on the Western Australian community. This Commonwealth scheme provides an avenue for survivors to seek compensation, which is an easier and more supportive avenue instead of civil litigation. The Department established a Redress Coordination unit which has liaised with government agencies to assist the Commonwealth Government in making determinations on applicants’ eligibility for redress.

Achievements at a glance 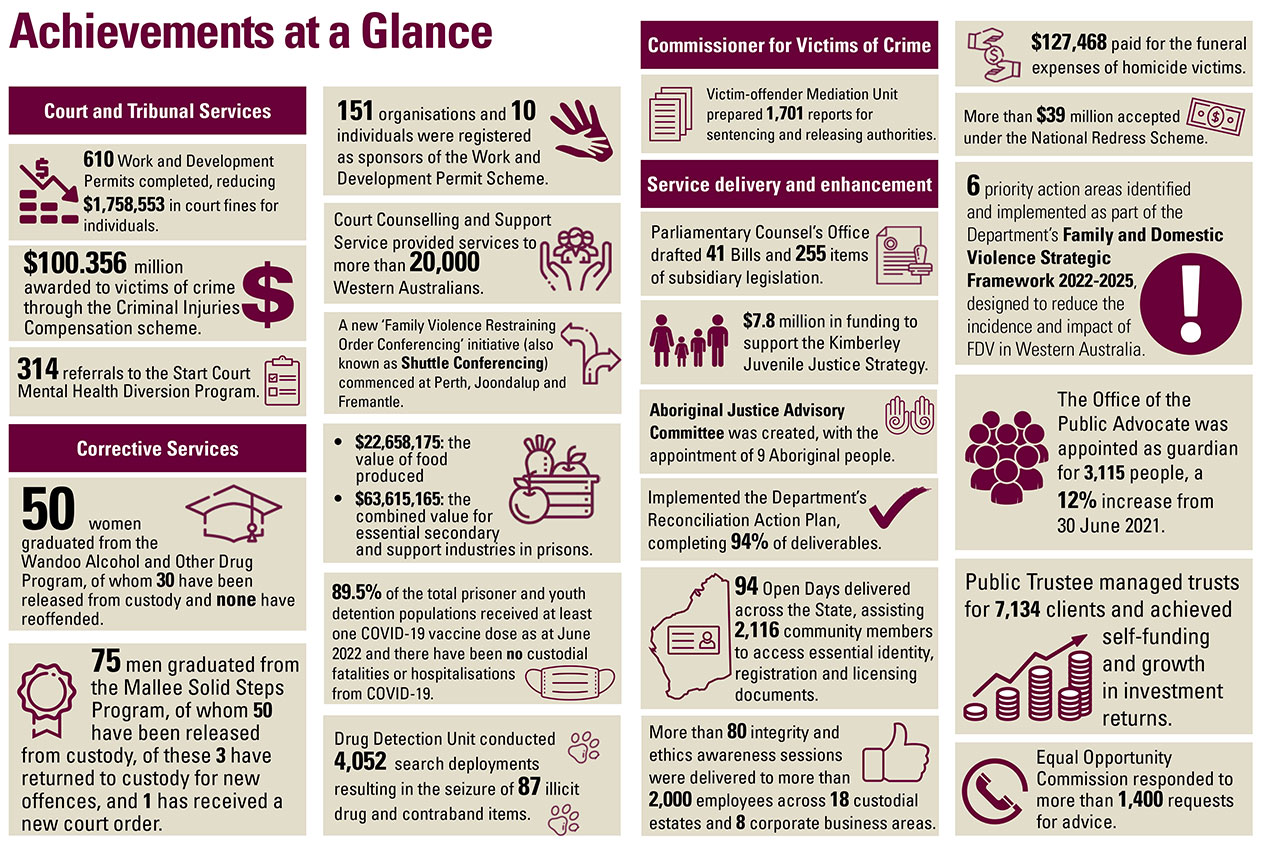 The Department is the agency principally responsible for assisting the Attorney General and Minister for Corrective Services in developing and implementing policy and the administration and compliance with approximately 200 Acts.

The Department is divided into 10 divisions with 28 directorates who provide a broad range of services. View the Department of Justice's organisational structure.

The Strategic Framework articulates the Department of Justice’s aim to be recognised and valued as a leader in developing and delivering justice services.

A fair, just and safe community for all Western Australians

The Department works with a range of organisations from other government agencies and statutory bodies to support the justice system in providing a safer community.

The Public Sector Commission (PSC) is an independent authority that brings leadership and expertise to the public sector to enhance integrity, effectiveness and efficiency.

Office of the Inspector of Custodial Services

The Office of the Inspector of Custodial Services (OICS) is an independent statutory body focusing on performance standards in custodial facilities and the rights of people in detention. It provides a high level of transparency and accountability of the sector through reports to Parliament.

Office of the Western Australian Ombudsman

The Office of the Western Australian Ombudsman serves Parliament and Western Australians by resolving complaints about the decision making of public authorities and improving the standard of public administration. The Ombudsman is an officer of the Parliament, independent of the government of the day and acts impartially of all parties in dispute.

Office of the State Coroner

The Coroners Court of Western Australia is a specialist court established to investigate certain types of deaths. The purpose of these investigations is to determine the cause and manner of death and also to consider ways that similar deaths may be prevented in the future.

The Prisoners Review Board (PRB) of Western Australia (previously the Parole Board) has the authority to grant, defer or refuse parole, taking into account factors affecting the offender, victims of crime and community safety.

The PRB's functions are set out in the Sentence Administration Act 2003 (WA).

The Supervised Release Review Board (SRRB) determines the suitability of young offenders in detention to be released on a supervised release order. The SRRB's role is set out in the Young Offenders Act 1994.

The High Risk Offenders Board, established under the High Risk Serious Offenders Act 2020 consists of relevant agencies involved with the management and oversight of offenders who are subject to an order made under the Act. This Board will facilitate the co-ordination of managing the State's most serious offenders.

Each year the Department of Justice’s annual report provides a summary of the key initiatives and activities of the department, including reports on performance, delivery of outputs and financial management.

The Department of Justice is committed to creating a culture of integrity and minimising the risk of corruption and misconduct. The new Justice Integrity Framework  outlines how the Department will do this.

Open Days - get help with identification, fines and licensing business

The Department holds open days to enable easy access for Aboriginal people who may need assistance with:

To enable us to help you, please bring along as much of the following as you can:

Community safety is a priority of all service providers. The following measures will be in place at Open Days to prevent the spread of COVID-19:

For more information, refer to the Information and advice on the COVID-19 coronavirus for the community and businesses in Western Australia.

About the Aboriginal Mediation Service

The Aboriginal Mediation Service is a free service that aims to assist and work alongside Aboriginal and Torres Strait Islander individuals, groups, and communities in a culturally safe manner to resolve conflicts before they escalate to court action.

Learn more about the Aboriginal Mediation Service and how they can provide assistance and support to Aboriginal and Torres Strait Islander people to resolve conflict.

Under the Public Interest Disclosure Act 2003 (referred to as the PID Act), any person can make a public interest disclosure if they believe something is wrong with the way a public authority (Department of Justice), public officer (our employees) or (the Department’s) public sector contractor has acted, is acting, or may be going to act and which is of public interest.

A public interest disclosure must relate to a matter that falls within the sphere of responsibility of the Department of Justice. It cannot relate to information that someone has, or is, engaging in criminal behaviour that is not connected to their employment or engagement with the Department.

The PID Act outlines important information about what may be disclosed, who it must be disclosed to (an authorised PID Officer), and also provides for the protection of people who make a public interest disclosure (PID), as well as those who may be subject of a PID.

The Department strongly recommends you seek advice before making a PID by: